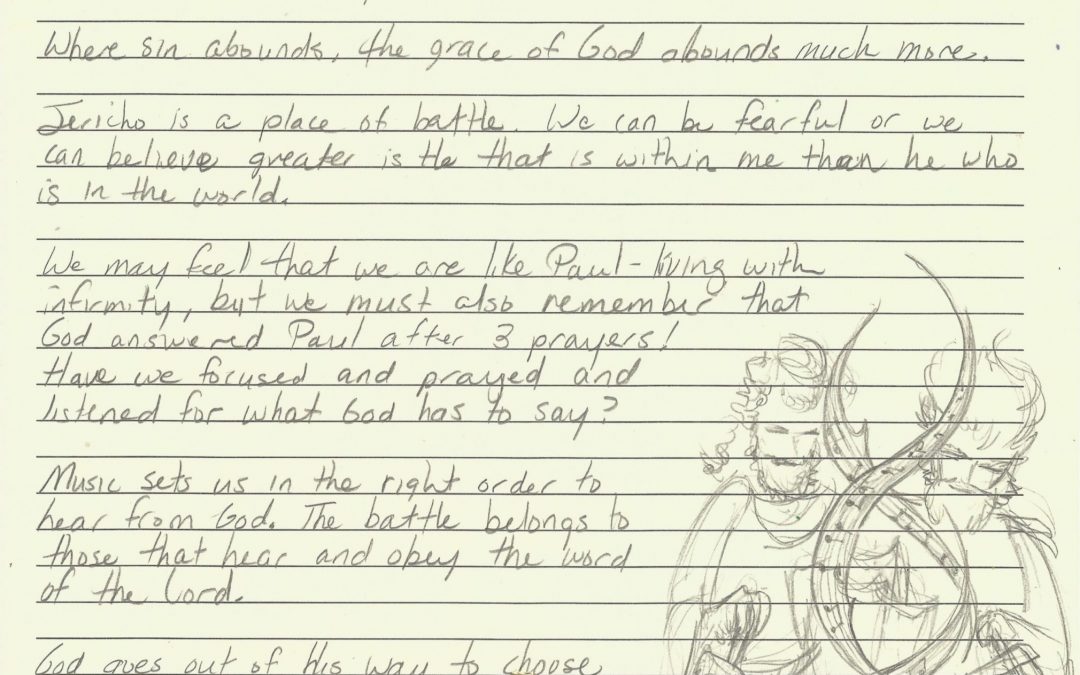 Mt Deliverance Worship Center sermon. Praises and prayer swirl into a holy channel of fire toward our heavenly Father.

**12/24/2019 Update**
My pastor’s wife almost died the day before this sermon and he still came in to preach, bless his strong soul. He also gave the word that she saw a vision where she was fourth in line for heaven. Three went in. She was stopped and told she had more to do. So we all laid hands on the pastor as he stood in for his wife. And that was what I was given to draw. I showed the pastor and he is very calm and collected and simply nods and says thank you. I didn’t think much about it again until I was stopped by his wife at the Christmas Eve service.

She starts talking about the two angels doing her battle, the ones that stand by each side. And I was thinking, yes that’s great! Then she said I drew them. She said her husband was given a word from the Lord that those two angels surrounding him in the picture were surrounding her and doing battle for her! And he ran in to her side, excited and telling her she had angels fighting for her. What a gift! What a revelation! I told her she gave me the best Christmas gift I could have asked for…to know that a little spirit inspired sketch meant so much to someone else.

So don’t be discouraged if you feel you don’t have much to offer. All I’m doing is scribbling notes during a sermon. But God can use anything He desires to speak through or to advance His kingdom.

2 Corinthians 3-4 – Though we live in the world, we do not war with human weapons. They are DIVINE and mighty in power! They will DEMOLISH strongholds.

2 Peter 3-4 – His divine power has given us everything we need. He has given us His very great and precious promises to that through them you may participate in the divine nature.

Where sin abounds, the grace of God abounds more.

Jericho is a place of battle. We can be fearful or we can believe greater is He that is within me than he who is in the world.

We may feel that we are like Paul – living with infirmity, but we must also remember that God answered Paul after 3 prayers! Have we focused and prayed and listened for what God has to say?

Music sets us in the right order to hear from God. The battle belongs to those who hear and obey the word of the Lord.

God goes out of His way to choose absurd ways to conquer His enemies. We will fail with our ideas and must be in close communion with God to hear, understand, and do His ideas.

God teaches us to trust Him instead of relying on our own cleverness. The foolishness and weakness of God is wiser and stronger than men.