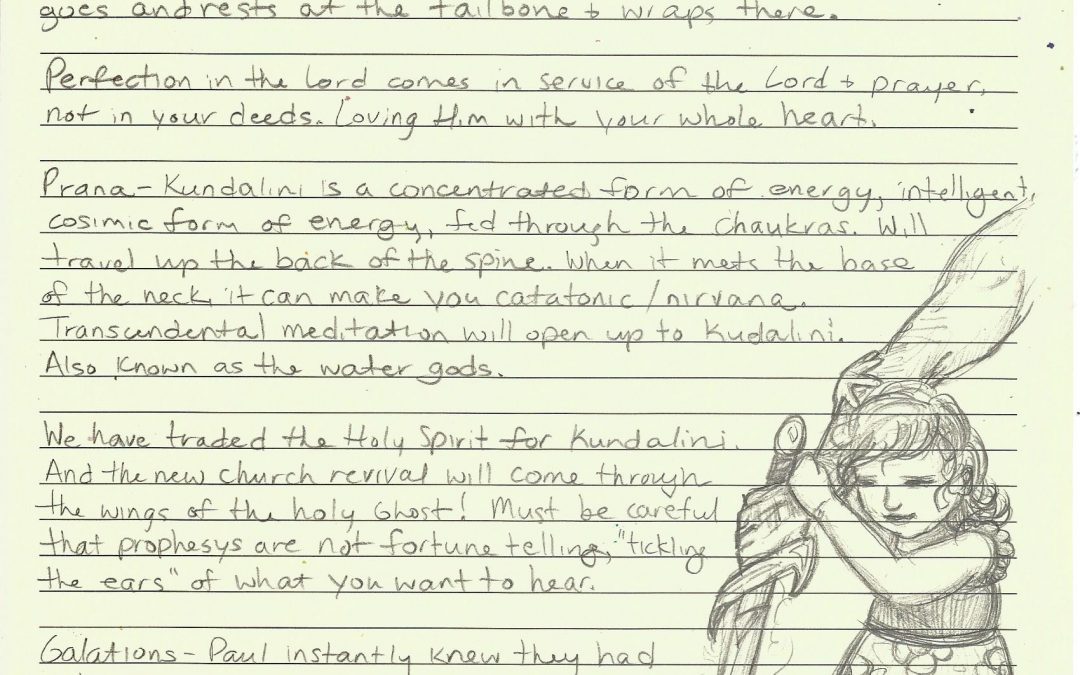 I saw this sermon was about Kundalini, the eastern snake spirit, so I wanted to do a drawing I’ve had on my mind for awhile of a woman stepping on the snake. Well, those thoughts wouldn’t come (it is almost like a complete block when it isn’t being led by the Spirit). What came out was a child on the serpent with the mighty right arm of the father killing it. We are children in warfare in so many ways, but when we take the steps forward in the name of Jesus, we have unimaginable power backing us.

Eastern religion just started into the churches in the mid-eighties. The church is falling under the power of the Kundalini spirit from eastern occult and religion.

Brought in through meditation. If you clear your mind of all things, you give entrance to demons. Hinduism and Buddhism worship the cobra snake. It comes inside and goes and rests at the tailbone and wraps there.

Perfection in the Lord comes in service of the Lord and prayer, not in your deeds. Loving Him with your whole hearty.

Prana (as defined by eastern religion) – Kundalini is a concentrated form of energy, intelligent, cosmic form of energy, fed through chakras. Will travel up the back of the spine. When it meets the base of the neck, it can make you catatonic/nirvana. Transcendental meditation will open up to Kundalini. Also known as the water gods.

We have traded the Holy Spirit for Kundalini. And the new church revival will come through the wings of the Holy Ghost! Must be careful that prophesies are not fortune telling, “tickling the ears” of what you want to hear.

Galatians – Paul instantly knew they had a different gospel. A mental change comes.

The Holy Spirit and Father will do nothing you don’t want to. It is not imparted from another human, only Jesus.

Luke 10:19 – Behold, I give unto you power to tread on serpents and scorpions, and over all the power of the enemy: and nothing shall by any means hurt you.