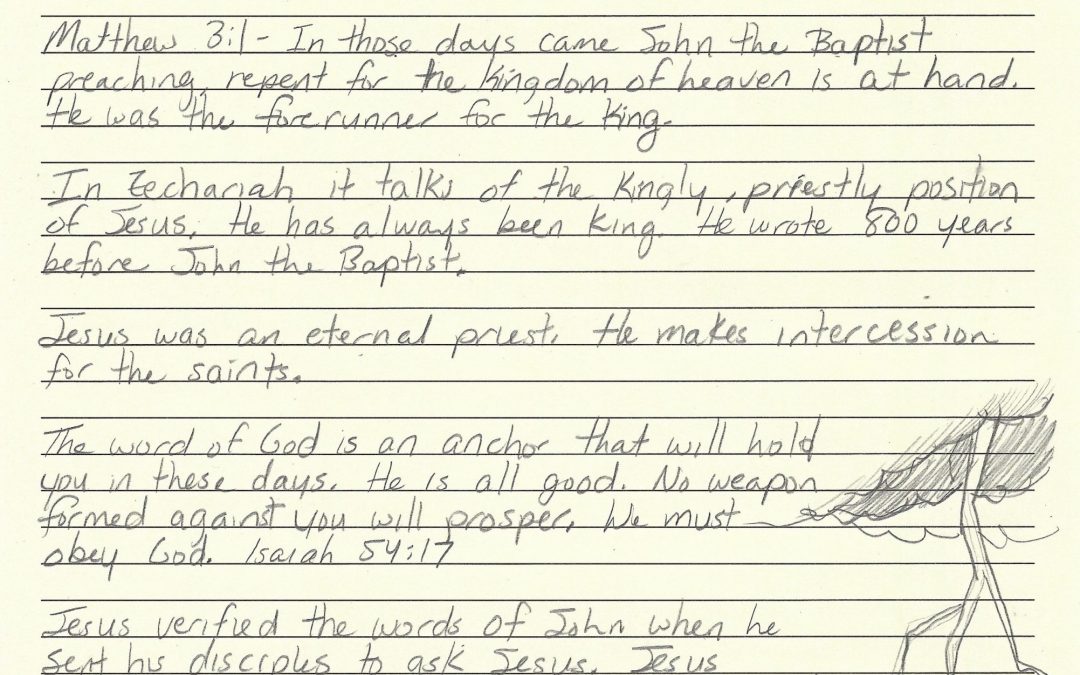 Mt Deliverance Worship Center sermon. This will be a three part series of postings. So much happened today.

I woke to a thunderstorm rolling past my house. Torrential down pouring followed by thunder. There was a long pause between the flashes of lightening and the cracks of thunders. Fifteen seconds. Then ten. Then suddenly a crack so near it sounded like a tree was hit on my property. Thunderous. Splitting. Like I could hear the lightening strike through the tree and then listen as it split and fell. I got the distinct impression that the Lord was speaking.

I pondered it for awhile…I was first thinking of the biblical scene where the Lord wasn’t in the winds, earthquake, and fire. He was in the still small voice.  I thought maybe this was His passing and the voice would come through a word in the church.  But it wasn’t right.  It was wind in the story, not lightning. And I got the distinct impression that the sound was His voice during and after the storm.

Then it hit me. I heard “the voice of the Lord splits the cedars of Lebanon”.   Which took me to this page with lots of commentaries: https://biblehub.com/commentaries/psalms/29-5.htm

The part that stuck out was the following excerpt, especially the sentence in bold:

“Thereby the stoutest are made to tremble, the proudest are cast down, the secrets of the heart are brought to light, sinners are converted, the savage, sensual, and unclean, become harmless, gentle, and pure. If we have heard God’s voice, and have fled for refuge to the hope set before us, let us remember that children need not fear their Father’s voice, when he speaks in anger to his enemies. While those tremble who are without shelter, let those who abide in his appointed refuge bless him for their security, looking forward to the day of judgment without dismay, safe as Noah in the ark.”

I only know that something was spoken in Spirit this morning. God breaks the tallest of the tall and brings them down. With the fear of this time and hour during this epidemic, we need to realize that we should be praising and fearing the one who has all the power. We do not need to fear the enemy or the Father’s voice when He cuts down the enemy. We are safe in Him.

Jesus preached the kingdom of God is at hand. A kingdom must have a king! He is the same yesterday, today, and tomorrow. King of all things and times.

He is the face of God. You cannot talk about the Holy Spirit without Jesus because Jesus opened the way for baptism by fire.

Matthew 3:1 – In those days cam John the Baptist preaching, repent for the kingdom of heaven is at hand. He was the forerunner for the King.

In Zechariah it talks of the Kingly, Priestly position of Jesus. He has always been the King. He wrote 800 years before John the Baptist.

Jesus was an eternal Priest. He makes intercession for the saints.

The Word of God is an anchor that will hold you in these days. He is all good. No weapon formed against you will prosper. We must obey God. Isaiah 54:17

Jesus verified the words of John when he sent his disciples to ask of Jesus. Jesus repeated scriptures instead of just saying yes. He spoke in a way that John KNEW He was the one to fulfill scripture.

Jesus was King and God before Pentecost. He always has been. Pentecost only built his ARMY. Instead of 12 disciples battling, we ALL battle through the Holy Spirit.