Trump and the Budding Rod of Leadership 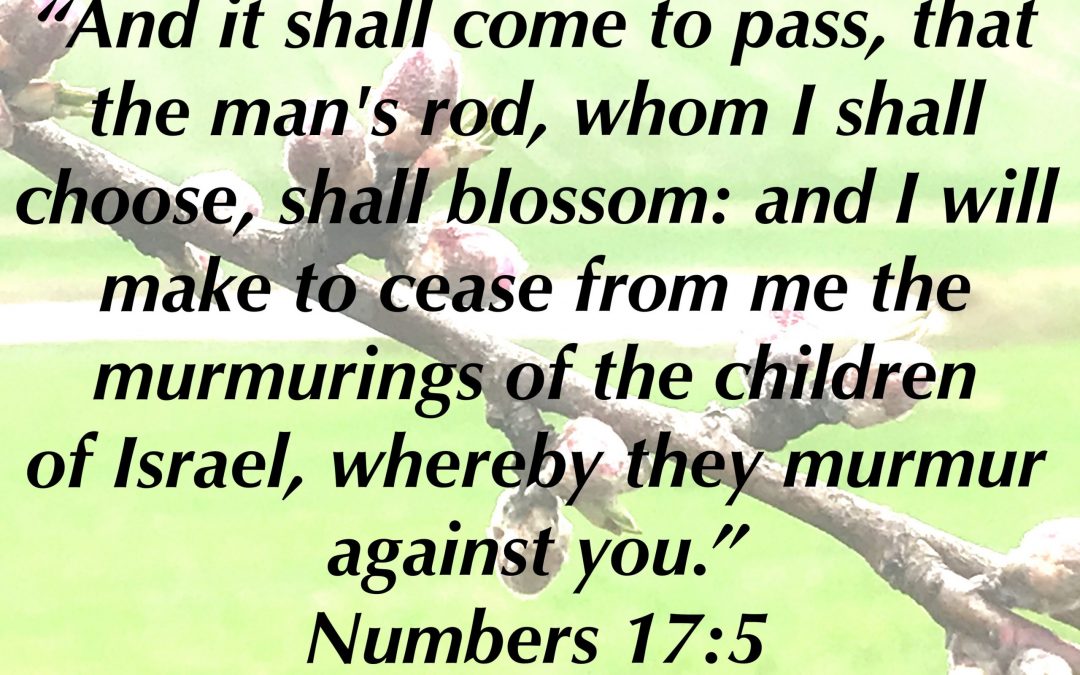 I was jogging in my backyard today and my peach tree drew me in. When God speaks, it is like someone tugs you, or someone calls your name in a room full of people. You know He has something to say. I stopped and began photographing the emerging buds and waited on what the Lord had to say as I thought about how beautiful it would soon be. Then the first verse I heard was:

” Then He also said to the multitudes, “Whenever you see a cloud rising out of the west, immediately you say, ‘A shower is coming’; and so it is. And when you see the south wind blow, you say, ‘There will be hot weather’; and there is. Hypocrites! You can discern the face of the sky and of the earth, but how is it you do not discern this time? “
Luke 12:54-56

Spring is budding. We can discern the new life that is coming forth, yet we cower in fear and proclaim it is the end of days when we focus on what is happening around us. Focus on God! Draw near to Him and hear what He has to say. His voice and direction will give you PEACE. The outpouring of His spirit is strong right now.

The other revelation that came was the rod of Aaron budding and blossoming. I didn’t understand the full extent of this one for awhile. It was revealed much later in the day. The budding rod quelled the revolting Israelites. Korah and his brethren challenged Moses and Aaron, claiming abuse of power and other things that were untrue. The Lord Himself settled the dispute by having the earth swallow up the whole rebellion. But still, immediately after, the people complained all the more before Moses. This time a plague went out and killed the people.

“So Moses said to Aaron, “Take a censer and put fire in it from the altar, put incense on it, and take it quickly to the congregation and make atonement for them; for wrath has gone out from the Lord. The plague has begun.” Then Aaron took it as Moses commanded, and ran into the midst of the assembly; and already the plague had begun among the people. So he put in the incense and made atonement for the people. And he stood between the dead and the living; so the plague was stopped. Now those who died in the plague were fourteen thousand seven hundred, besides those who died in the Korah incident. So Aaron returned to Moses at the door of the tabernacle of meeting, for the plague had stopped.”
Numbers 16:46-50

I am hit while I am writing this. God is nudging me right now, while I’m typing, tying more into this revelation. On March 15th, my drawing for the service was the church surrounded in incense, with the cross standing between it and the virus. See it here. God has been leading my prayers for weeks now, having me place that cross there for His people: having me plead the atoning incense of His Holy Spirit to separate us from the virus. The Pastor even preached about the fragrance of God’s people during that same sermon!

The Lord is setting up His anointed and we should heed what is happening. We need to be covered in the blood: in the sweet incense of the Holy Spirit to be separated from this plague. Are you murmuring and complaining about the leader of the free world? Repent and read. Because there’s more to this.

Why is the rod important? Because it established God-given authority. It showed without a doubt who was meant to lead and who’s voice should be followed. It showed who had the Lord’s anointing.

“And the Lord spoke to Moses, saying: “Speak to the children of Israel, and get from them a rod from each father’s house, all their leaders according to their fathers’ houses—twelve rods. Write each man’s name on his rod. And you shall write Aaron’s name on the rod of Levi. For there shall be one rod for the head of each father’s house. Then you shall place them in the tabernacle of meeting before the Testimony, where I meet with you. And it shall be that the rod of the man whom I choose will blossom; thus I will rid Myself of the complaints of the children of Israel, which they make against you.”

So Moses spoke to the children of Israel, and each of their leaders gave him a rod apiece, for each leader according to their fathers’ houses, twelve rods; and the rod of Aaron was among their rods. And Moses placed the rods before the Lord in the tabernacle of witness.

Now it came to pass on the next day that Moses went into the tabernacle of witness, and behold, the rod of Aaron, of the house of Levi, had sprouted and put forth buds, had produced blossoms and yielded ripe almonds. Then Moses brought out all the rods from before the Lord to all the children of Israel; and they looked, and each man took his rod.”
Numbers 12:1-9

The Lord clearly established the leadership and priestly duties of Moses and Aaron. The rod budded, blossomed, and yielded ripe almonds. The murmuring and complaining of the people against the leadership was STOPPED.

Who else do we hear murmuring and complaining about? In every corner of the news, on the lips of so many people. Criticism, complaints, and mocking the leadership of the Lord’s chosen leader. Trump has endured it all since the very beginning. God was having me ponder the peach tree because it represented Aaron’s rod budding. The blossoms and fruit are soon to come. I believe God is speaking clearly here. Through all this death and plagues and dissent, He is establishing who is meant to lead. He is establishing the words and actions of Trump. He is establishing who we should follow. It will be made clear.

“Every person is to be in subjection to the governing authorities For there is no authority except from God, and those which exist are established by God. Therefore whoever resists authority has opposed the ordinance of God; and they who have opposed will receive condemnation upon themselves.”
Romans 13:1-2

“It is He who changes the times and the epochs; He removes kings and establishes kings; He gives wisdom to wise men And knowledge to men of understanding.”
Daniel 2:21

When the words of Trump ring true and the media is caught in lies once again, will you still mock him? Will you risk losing the protection of the Father by coming against the authority He has established for this day and hour? Watch for the flowers and fruits of God’s anointed. They will be revealed.