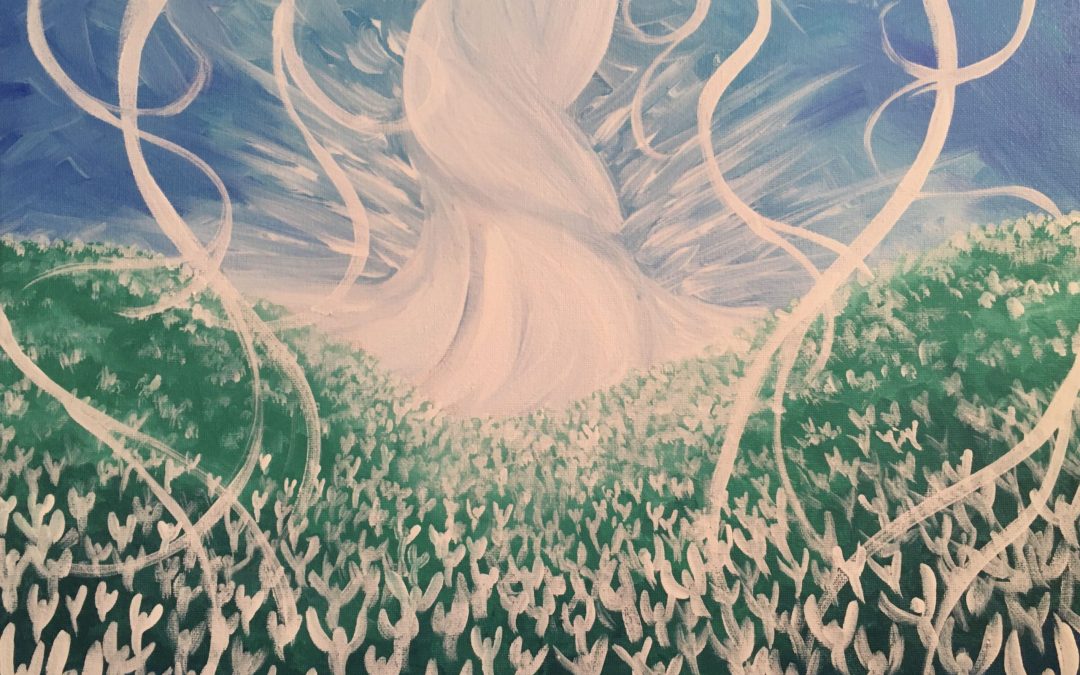 Final worship was ending with the song “What a Beautiful Name”. My spirit sings with that song every time I hear it. I thought, “God, what joy it must bring you to see your people raising their hands to you in praise.” I thought about even the angels lifting hands in praise. They were probably surrounding the alter at that moment in worship. Then I saw a multitude of hands lifted. Millions of bodies, more than could be counted, all gradually sloping toward a great ball of light in the center that shone over them. They looked like a snow covered pine forest bathed in His light, progressively becoming lighter and lighter shades of green as they neared Him. He was showing me His great shining joy over the praises of His people.

After seeing the forest, I thought we are rooted in Him like the trees. How beautiful. But then I thought, Lord, we aren’t rooted like the trees. We can freely move closer to you! Then a spectacular change happened. The ball of light became a giant white living tree that vined out over the people and connected to them from above. Each branch was living and flowing and we were like the fruit attached at the ends. It was absolutely incredible to witness. Our roots in Christ come from above.

I also heard Him impress the words “draw closer to me” and I knew He has great joy in the praises of His people. As I shared the vision with a friend, she said she KNEW someone was getting a vision during that song, and then spoke of the roots of joy. Then one of the pastors walked up. He hadn’t heard anything, but he came to us and said he just wanted to let us know that the Lord had placed a word in his heart from the beginning of worship. He felt it all through the sermon too and was so excited he could barely stay in his seat. He says, “I’m telling you, the Lord is speaking Joy today!”

The tying in of two completely different people on the same word was incredible! The Joy of the Lord is our strength. We are tied into his vine. Not immovable like the trees in the ground, but moveable with our roots based in heavenly places.

And the final word I got as I finished the painting was the the train of His glory fills the temple. When I look on this painting, I see His white light of glory spreading out like a beautiful garment from the base of the tree.

Praises to the Father, Son and Holy Spirit!