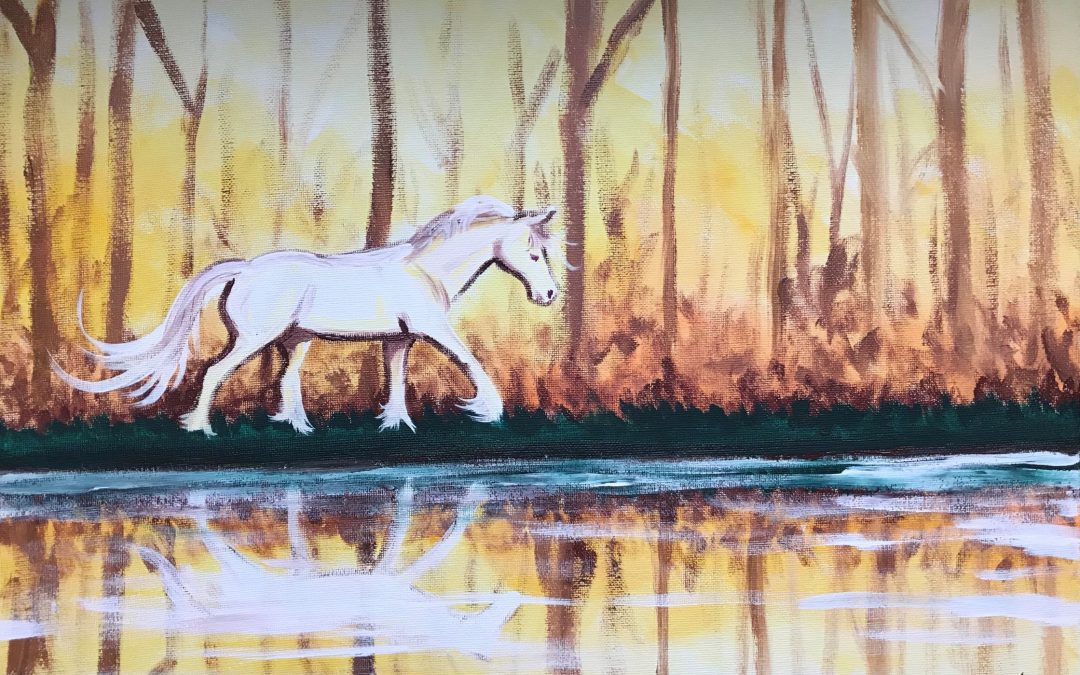 I was asked to paint for today’s service…at 10pm last night…with the request that I don’t sketch anything out beforehand and let it be all Holy Spirit led. Of course I had to say yes, but I was a little nervous. So far I have always sketched my idea on the canvas before the service. So I went to bed with a bunch of different ideas already streaming through my thoughts. The kept turning to paths in forests with lone animals walking them. Fawns, deer, horses, wolves, lambs…the animal would change. The angle would also change. Even the forest changed. But the ideas remained largely the same.

By morning the most prominent idea image was the side view of a deer walking a straight path through the forest. The far side would just show scary looking eyes through the dark trees. On the closest side, you would be able to see animals peering curiously through the trees at this lone deer moving forward on a path of light. I was understanding that while we may view the forest we travel through as dark and scary, we are being watched as we walk on our path with God with great curiosity. And others will take to the path themselves because we led the way.

I knew this painting was much too complicated for worship service. As the morning went on, I kept asking God for a defined image. One that I could do in the short time I have to slap paint on a canvas. On the way to church, I kept seeing golden tones in the forest and I knew God did not want me painting a dark scene. Then I saw a white horse walking a path between the forest and the water. As the water was a witness to the creation of the world, it stands as a witness to every step we take on the path God has set before us.

Worship service was powerful and was followed by a sermon that was just as riviting. God was moving today. And then the preacher opened the alter for anyone to come. And I suddenly felt in my heart that someone NEEDED to be there. A powerhouse worship and service couldn’t be followed by an empty call. A few people stood up and I thought that was the answer, but they went to other things. And then I felt the strong conviction of God that I needed to go. It didn’t matter if anyone else walked up or if I was kneeling alone in the front, but I needed to do it. So I did. And sang and praised in tongues. When I opened my eyes, there were a bunch of others beside me! The alter was full! What a powerful blessing!

Later my husband and I were talking about it. He said he was going to join me two times, but both times he felt something pull him back. Like God held him back. I believe it was because I didn’t come to the alter hurting. I got prayers and hands laid on, but they were just a lovely addition. I was there for God. And as I told him why I went up, I stopped and exclaimed in surprise, “I walked the path!”

Suddenly I saw the prophetic connection between the source of the painting and real life. Sometimes God only need you to walk forward to Him, focused on Him, not caring one bit what it looks like to others. Because those steps forward on the path will encourage others to do the same. I feel the painting and the acting out are a prophetic announcement of many more people being called out from the shadows of the forest on their own path toward God…all because of the steps of faith of others. Be the leader on the path. It may feel lonely if you continually glance at the circumstances surrounding you and focus on the forest, but it is a lovely thing when you set your eyes on the light of Jesus and move closer to Him.